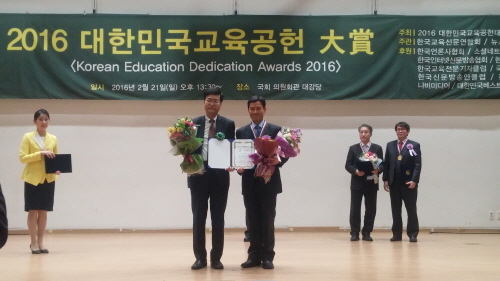 Angel Co., Ltd. (www.angel-juicer.com) Chairman Lee, Moon Hyun was awarded a prize at the 2016 Educational Dedication Awards. The awards ceremony was held on the 21st at the Grand Hall of the National Assembly Hall with approxminately 300 people in attendance. Fourty-nine individuals and organizations from ten divisions were honored in recognition of spreading education and service, including Angel, Inc., which was awarded the grand prize in the Education Enterprise category. The event was organized by the committee of the 2016 Korea Educational Dedication Awards, hosted jointly by the Korea Press Association and News Edu Newspaper and sponsored by 120 other media outlets.

Award recipient Lee, Moon Hyun said, "It has been the most rewarding moments of our lives to restore people’s health and prevent disease through diet not only for patients with incurable diseases but also for ordinary people. He added, "We are working hard to set up a food research institute and a healing research institute to scientifically clarify the principles of natural healing. Based on more professional research results, we will continue to be a company that contributes to the improvement of the health of the nation."

Lee, the first person in Korea to develop a juicer, has been helping many patients with incurable diseases such as diabetes, hypertension, vascular disease, and liver cancer for forty years.

Lee has his own bitter experience in the background of the development of the juicer. When I was young, I suddenly tried to give up on my life because of an unexpected serious illness, but through that experience I became interested in the relationship between food and health. Lee, who overcame the disease with both rice and raw vegetables, later developed the Angel Juicer by studying how to consume as much of the living nutrients of a plant as possible.

Lee actually created the nickname 'green juicer' and it soon became popular with people. Actually, Angel Juicers are known to be the best tool to extract essential nutrients from raw vegetables and fruits for patients suffering from various diseases such as diabetes, hypertension, and cancer. This is because it makes the the juice by extracting not only the juice of leaves, stems, and roots of vegetables, but also the fibrous tissue. ‘Tissue’ juice contains numerous vitamins that are alive and contain minerals and enzymes that are essential for the absorption of vitamins.

Lee has focused on improving the health of people for over forty years. Through the power of only technical skill, he has exported Angel Juicers to fifty-two countries around the world creating a solid medium-sized business and contributing also to the national and local economies. He has also established a natural healing research institute and has been working as a health evangelist in a dietary life improvement program for patients with various incurable diseases that have given up on modern medicine. Lee’s principle of healing is described in detail in his book ‘The Revolution of Intractable Revolution.’
In addition to this prize, Angel Juicers have received awards such as the Consumer Brand Award of the Korea Consumer Awards, Global Luxury Brand Award, the Prime Minister's Prize of the Women's Business Association, and the Korea International Trade Association's Export Tower, as well as being awarded more than ten patents.